CAN DUTERTE END “REIGN OF ERROR” IN PH?

NARITA, Japan (JGL) – I was on my way to Chicago, Illinois when I got a PM (private message) on my Facebook account that my cousin’s husband was gunned down because he refused to give up his dream to become a councilor in the municipality of Matnog, Sorsogon.

Seven bullets from a .45 pistol were pumped in various parts of the body of Cayetano “Onoy” G. Oro, Jr., 58, an UNA candidate, by two men, who fled after his killing in front of the house of Barangay Captain Nelson Gacis in Pawa, Matnog at about 6:20 p.m. on April 25.

I felt guilty because I was in Matnog a few days before the shooting for about five hours while I was writing a story for my outlets in one of the Internet cafes there. But I forgot to ask Onoy’s uncle, retired Matnog policeman Nonoy M. Garra, for me to talk to Onoy.

Onoy’s death followed the broad daylight shooting of Onoy’s uncle, also a retired policeman Virgilio “Bilyong” Garra, who was also gunned down after losing his election as Matnog councilor in the 2013 elections.

Like Onoy’s death, Bilyong death was also attributed to the “people’s justice” promoted by the New People’s Army (NPA’s).

In other words, Onoy’s death will be an unsolved crime again — a perfect crime, where killers will never be brought to justice – like Bilyong’s.

Will this murder of impunity stop if Mayor Duterte were elected president on Monday, May 9?

It remains to be seen.

I am not a big fan of Mayor Duterte, in fact I am leaning on voting for the Gobyernong may Puso, but if Duterte wins and make good his threat to pulverize the criminals, like the killers of Onoy and Bilyong, I might warm up to Duterte’s Death Squad (DDS).

Like Hitler’s SS (Schutzstaffel) or Marcos’ Metrocom Intelligence and Security Group (MISG) or Metrocom Strike Force (MSF), who could not shoot straight, President Duterte’s Death Squad (DDS) should still give killers of Onoy and Bilyong a day in court before DDS take matters into their own hands.

These killers should hope and pray that Mayor Duterte does not win on Monday. 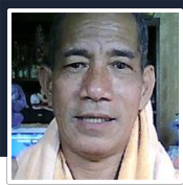 The NPA’s had already claimed responsibility for the killing of Bilyong because they alleged Bilyong was pushing drugs. But the NPA’s brand of justice is spotty. If the hierarchy of NPA’s only investigated Bilyong first before killing him, they would learn that their intelligence information was flawed.

Bilyong could not have sold drugs because he did not even have money to buy medicine to cure his big boil on his neck. (Please note the towel covering his boil in this photo).

When there is dead body, a good police agency can motu proprio (on his own impulse) conduct a criminal investigation even if there is no complainant. The dead body is considered “evidence,” a “smoking gun.” Why wait for the scared complainant to come forward when the government under the Constitutional doctrine of “parens patriae” can extend protection to the victims of crime by prosecuting the criminals?

I’ve been prodding the relatives of Bilyong to sue the NPA’s but my relatives were hesitant to do so, because they feared they would be the next victims of NPA’s.

True enough, their fear and apprehension unfolded before their very eyes when Onoy was killed and the killing was attributed yet again to the usual suspects – the NPA’s.

But Onoy was not even a suspected drug pusher either, nor a common criminal. Onoy just wanted to make his dream as an elected municipal councilor come true.

Where is the outrage of the community?

But I have a feeling the NPA’s are terrorizing the peace-loving people of Matnog, the birthplace of my mother, because the NPA’s are conspiring with or are being coddled by local municipal officials of Matnog and Sorsogon provincial officials.

When the death of Bilyong was brought up two years ago in my conversation with Matnog Mayor Emilio G. Ubaldo, Mayor Ubaldo was silent. (Please see my photo with Mayor Ubaldo.)

According to grape vines when Bilyong ran for councilor in Matnog, Mayor Ubaldo felt threatened by Bilyong’s candidacy.

BILYONG WAS AS POOR AS A RAT

How can Bilyong become a threat to Mayor Ubaldo? Bilyong is as poor as a rat. His pension as a retired policeman was not even enough to feed himself. Bilyong did not even have money to buy medicine to cure the big boil on his neck. My sister and nephew gave Bilyong money to buy medicine to cure his boil but Bilyong saved the money for himself so he could keep his small business going while he endured the pain.

Bilyong obviously did not profit from his business because when he was gunned down, his boil was still sticking on his neck and was even growing!

And I surmise, Mayor Ubaldo also felt threatened by Onoy.

Bilyong and Onoy were only running for lowly municipal councilors. Why will Mayor Ubaldo feel threatened?

The Mayor (left) with the author Josep G. Lariosa

Mayor Ubaldo has been the undisputed political warlord in Matnog. Bilyong and Onoy were not even challenging him. Why doesn’t he let other people run for office in Matnog so they can also serve the people, like Bilyong’s granduncle, the late Lamberto “Papa Titong” G. Garra, who was a long-time outstanding councilor of Matnog with unblemished record?

NPA’S SHOULD BE PROSECUTED BY HRC

In the first district of Sorsogon, NPA’s demanded and was granted P1.2-M (US$26,666) by candidate running for congress while NPA’s demanded but was rejected when they demanded P500,000 (US$11,111) from a gubernatorial candidate (Eric Dioneda) of Duterte’s PDP-Laban party because the candidate does not have money. Eric Dioneda is the son of Sorsogon City mayoral candidate Leovic Dioneda, who died of heat stroke last week. Leovic will be replaced (or substituted) by his eldest daughter, Jo Abegail “Bem” Dioneda.

Onoy is going to be replaced (or substituted) by his sibling.

Another Sorsogon gubernatorial candidate, Bobby M. Reyes, who is running as an independent supporting Grace Poe, said he does not have money to pay the PTC to the NPA’s but he will focus his campaign on airwaves (radio/TV/social media) and print media so his message can hopefully reach out to the areas under the influence of the NPA’s.

If NPA’s extortion activities weaken because of the reward money, then reward money should also be given to anonymous tipsters of terrorists groups, like Abu Sayyaf.